Miami will try to keep its playoff hopes alive when it hosts the New York Jets on Sunday afternoon in the final week of the regular season. 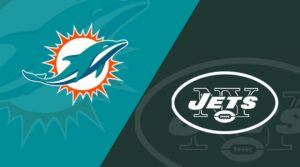 Miami’s season has taken a similar path to New York’s, going 8-3 through its first 11 games. One of those three losses came in a Week 5 40-17 thrashing of the Jets, which remains their worst performance of the season.

They won five straight games from the end of October to the end of November, but have since lost five in a row.

However, Miami still has a chance to make the playoffs if it wins against New York and Buffalo wins against New England this week. Last week, the Dolphins were without starting quarterback Tua Tagovailoa (concussion), and he is expected to be out again on Sunday.

According to David Furones of the South Florida Sun Sentinel, Tagovailoa (concussion) has been ruled out of Sunday’s game against the Jets.

New York was one of the season’s biggest surprises, winning seven of its first 11 games. During that stretch, the Jets defeated the Packers and Bills, turning heads throughout the league.

They have been unable to build on their early-season success, having lost five straight games entering Week 18. Last week’s 23-6 loss to Seattle officially eliminated them from playoff contention.