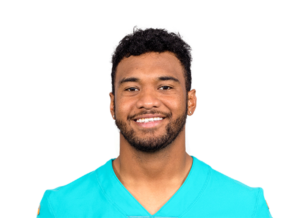 UPDATE (Jan. 15): Tagovailoa (concussion) has yet to be cleared for football activities and won’t play in Sunday’s playoff opener against the Bills.

UPDATE (Jan. 11): According to Marcel Louis-Jacques of ESPN.com, on Monday, coach Mike McDaniel said that Tagovailoa (concussion) is not yet cleared for football activity.

While Tagovailoa hasn’t suffered any setbacks, Louis-Jacques says the Dolphins hope to learn more about the quarterback’s condition on Wednesday. Tagovailoa’s status is still up in the air as the team prepares for its playoff debut this weekend against the Bills.

UPDATE (Jan. 8): According to David Furones of the South Florida Sun Sentinel, Tagovailoa (concussion) has been ruled out of Sunday’s game against the Jets.

Updated (Jan. 1): Coach Mike McDaniel confirmed Friday that Tagovailoa (concussion) will miss Sunday’s game against the Patriots, according to Marcel Louis-Jacques of ESPN.com and David Furones of the South Florida Sun Sentinel.

Update: With Tagovailoa in the NFL’s concussion protocol for the second time this season, the Dolphins are gearing up for Teddy Bridgewater to take over at quarterback against the Patriots on Sunday.

According to coach Mike McDaniel, Tagovailoa is being evaluated on a day-to-day basis, and there is no timetable for the quarterback’s return to game action.

According to Travis Wingfield of the Dolphins’ official website, coach Mike McDaniel confirmed Wednesday that Tagovailoa suffered a concussion in Sunday’s loss to the Packers.

Tagovailoa was placed in the NFL’s concussion protocol on Monday due to symptoms reported after Sunday’s loss.

McDaniel declined to say whether the team will approach Tagovailoa’s recovery with extra caution, according to Barry Jackson of the Miami Herald, given that this is his third time being evaluated for a concussion due to an in-game hit this season.