On Monday, November 21, 2022, at 8:00 PM ET at Target Center in Minneapolis, Minnesota, the Miami Heat will conclude a four-game road trip against the Minnesota Timberwolves. 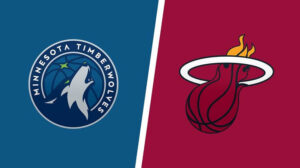 The Miami Heat began their road trip last Wednesday, falling to the Toronto Raptors 112-104. The Heat were defeated in overtime by the Washington Wizards 107-106 a few days later.

Dedmon missed his team’s last game against Washington on Friday, but he looked like himself on Sunday evening. He scored in double figures for the second time in three games and had his best rebounding night since Nov. 7 against Portland.

Dedmon has averaged 6.8 points and 3.3 rebounds in 14 games this season.

Tyler Herro (ankle) will miss Monday’s game against the Timberwolves.

Tyler Herro, who has a sprained ankle, will miss another game on Monday, joining a long list of Heat players who have been ruled out.

Gabe Vincent will miss his second game in a row due to a knee injury.

Duncan Robinson (hand) and Bam Adebayo (hand) are both listed as questionable.

Butler’s absence leaves Miami severely undermanned on the wing, as Tyler Herro (ankle) and Duncan Robinson (hand) were both ruled out.

The Minnesota Timberwolves (8-8; 6-10 ATS) defeated the Philadelphia 76ers 112-109 on Saturday as 3.5-point road favorites. The T-Wolves have now won three straight games, but they have failed to cover for the fourth time in six games.