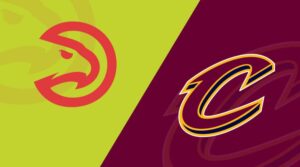 You can read also: Are Giannis Antetokounmpo and Khris Middleton READY vs Blazers? Injury Reports Bucks

On the offensive end, they average 115.2 points per game while shooting 46.5% from the field.

This team ranks ninth in points per game but 19th in team shooting percentage.

The Hawks rank 13th in the NBA with an adjusted offensive rating of 112.1.

The Hawks allow 114.4 points per game on defense while allowing their opponents to shoot 45.7% from the field.

They have the third-lowest three-point shooting percentage allowed in the NBA as they continue to pressure their opponents on the outside. The Hawks also rank fourth in the league with 46.2 rebounds per game.

Trae Young leads the way offensively for this team, averaging 27.3 points per game on 39.4% shooting from the field.

Bogdan Bogdanovic SG (Knee) is unavailable due to injury.

The Cavaliers are currently fourth in the Eastern Conference, 3.5 games behind the Celtics.

The Cavaliers have the fifth-highest adjusted offensive rating in the NBA, according to dunksandthrees.com, at 115.9.

In addition, they score 115.9 points per game and shoot 47.5% from the field. This is the eighth-highest point total per game and tenth-highest team shooting percentage in the league.

The Cavs have also shown that they can make it rain from behind the three-point line. They shoot 39.4% from deep, which ranks second in the NBA.

The Cavaliers must continue to capitalize on their free-throw opportunities if they are to continue their upward trajectory. They are 12th in the NBA in free throw percentage, making 79.5% of their attempts.

On the defensive end of the court, the Cavaliers have held their own. Their opponents outshoot them 46.1% of the time and score 110.1 points per game.

This is the 15th-lowest field-goal percentage and 10th-lowest point total allowed per game. The Cavs also rank 11th in the league with 44.6 rebounds per game.

They must clean the glass and secure the ball after missed shots if they are to prevent the Hawks from scoring second-chance points.

Darius Garland is ready for the game tonight.

Donavan Mitchell leads the way for the Cavaliers, averaging 31.2 points per game on 50.2% shooting from the field. He has also gotten his teammates involved, as he leads Cleveland in assists with 5.8.

Mitchell posted his eighth game of 30 or more points so far this season over 13 contests, and he continues to stuff the stat sheet on a nightly basis. He’s averaging 31.2 points, 4.5 rebounds, 5.8 assists and 1.4 steals on the year.