The Wizards will take on the Thunder in Oklahoma City. The game begins at 8:00 p.m. EST inside the Paycom Center. This is the second time these two teams have met this season. 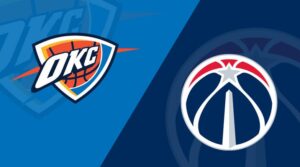 The Wizards enter this game after a 123-113 loss to the Milwaukee Bucks. They struggled on defense, as they were unable to get enough stops to remain competitive in that game.

Daniel Gafford (Elbow), Taj Gibson (Groin), and Bradley Beal (Hamstring) are all questionable for this game.

Taj Gibson (groin) is listed as questionable for Friday’s game against the Thunder. Gibson has missed three consecutive contests with left groin soreness. If he remains sidelined, Daniel Gafford would continue to see an expanded role.

Meanwhile, Bradley Beal re-injured his hamstring in Tuesday’s 123-113 loss to the Bucks after missing the previous three games. The Wizards announced on Thursday that Bradley Beal has a low-grade left hamstring injury and will miss the next three games before being re-evaluated in about a week.

The Oklahoma City Thunder are coming off a 126-115 loss to the Orlando Magic. They also struggled defensively, as they were unable to contain the Magic in that game. If they want to dominate at home, they will need to apply more pressure and be more efficient.