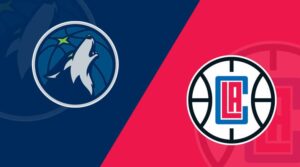 The Los Angeles Clippers dropped their third game in a row on Monday, as Kawhi Leonard sat out with a non-COVID-19 illness and Paul George only played five minutes in the fourth quarter after tweaking his hamstring.

George’s injury is in the same area where he previously strained his hamstring, making him questionable for Thursday’s game against Denver. From late November to early December, he missed seven games as a result of this setback.

The Clippers appeared to be regaining their health, but it didn’t last long. While Leonard is expected to play on Friday, forward Nicolas Batum (ankle) is doubtful.

Paul George (hamstring) will play against the Timberwolves on Friday.

George will not miss any games after experiencing hamstring discomfort during the Clippers’ loss to the Heat on Monday.