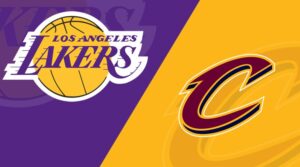 With a new lineup, the Lakers have won three straight games and are back on track. Los Angeles is 7-2 in its last nine games.

Anthony Davis has been dealing with low back tightness for the past four games, but he has played through it.

On Sunday, Davis scored 55 points while shooting 73.3 percent from the field and going 9-for-9 from the free throw line. He has been a driving force in the success of the Los Angeles Lakers and has reestablished himself as one of the league’s top players.

On Tuesday, LeBron James (ankle) is expected to play against the Cavaliers.

James is still nursing an ankle injury, but the 37-year-old has appeared in six straight games and should be ready to face his hometown team on Tuesday.

In his first six games back from his initial adductor injury, James has averaged 28.2 points, 8.2 rebounds, 6.0 assists, and 1.3 steals.

Meanwhile, due to left shoulder soreness, Wenyen Gabriel is questionable for Tuesday’s game against the Cavaliers.

He has appeared in 19 consecutive Lakers games, but his status for Tuesday’s game against the Cavaliers is questionable.

If Gabriel is forced to sit out, his next game will be on Wednesday in Toronto.

In terms of injuries, the Cavaliers are still without point guard Ricky Rubio, who has yet to play this season due to a knee injury, though he has recently begun practicing 3-on-3.

They are also without Allen, who is out indefinitely due to a back injury, and forward Dean Wade, who is out for a few weeks due to a shoulder injury.