This Wednesday, the Portland Trail Blazers will travel to Oklahoma City to take on the Oklahoma City Thunder. These two teams matched up earlier in the week, as the Thunder walked away with a 123-121 victory. 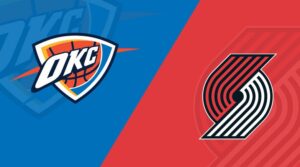 The Portland Trail Blazers are coming off a loss to the Oklahoma City Thunder. They struggled on defense, and they’ll need to get more stops in this one if they want to challenge the Thunder on the road.

Damian Lillard is probable to play in Wednesday’s game versus the Thunder due to a left wrist sprain.

Lillard suffered a minor wrist injury in Monday’s loss, but it is unlikely that he will miss any time. Since returning from a calf injury, the star guard has averaged 31.1 points, 7.0 assists, 3.1 rebounds, and 1.3 steals in eight games.

Nurkic (calf) is questionable for Wednesday’s game against the Thunder.

Nurkic is doubtful to play in his second straight game due to right calf soreness. If the 28-year-old center is unable to play on Wednesday, Drew Eubanks will most likely start again.

The Thunder were extremely efficient in the second half of their previous game against the Blazers, scoring basket after basket. If they want to challenge the Blazers at home, they must stay hot in this one.

Bazley will miss a fourth game due to illness. In his absence, Eugene Omoruyi, Kenrich Williams, and Lindy Waters remain viable candidates.

Giddey will miss a third game as he recovers from an illness. Aaron Wiggins is a strong candidate for another start and a larger role.