The final game of the super wild-card weekend in the NFL is from Florida. Dallas Cowboys travel to Tampa Bay Buccaneers Monday night.

9 Questionable, 1 Out for Buccaneers-Cowboys game 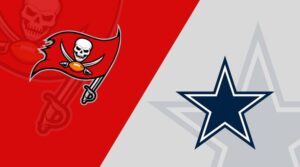 The Wild Card playoff game between the Tampa Bay Buccaneers and Dallas Cowboys will take place on Monday night, and both teams have released their final injury reports.

While there is a long list of key players on both sides of the ball who have been listed as injured this week, no one on the active roster has been ruled out.

There is some doubt as to whether or not Nick Leverett (knee/shoulder) and Kyle Rudolph (knee) will suit up for the game on Monday night. Unfortunately, neither player was able to get in any Saturday practice time this week. It’s concerning that Nick Leverett is hurt because starting center Robert Hainsey (hamstring) and backup lineman John Molchon (ankle) are both doubtful for the game.

The team’s center, Ryan Jensen, injured his knee in preseason and hasn’t played since. If he comes back, the team might have a chance. There’s a chance Jensen will be activated from the IR on Monday before the game. When that time comes, according to head coach Todd Bowles, they’ll make their guard and center selections.

Only Vita Vea among the Buccaneers was limited in practice on Saturday, but Hainsey was able to do just about everything (calf.) Vea should be available on Monday barring any unforeseen circumstances.

When it comes to injuries, the Cowboys have few worries. No one else has been arrested, just Trayvon Mullen. Micah Parsons, a defensive end, missed Saturday’s practice due to a family emergency.