On Friday, the Golden State Warriors (20-21) will go to San Antonio, TX to play the San Antonio Spurs (13-29). At the Alamodome, the game will start at 7:30 PM EST. This will be the second time this season that these two teams play each other. The Warriors won the first match, 132-95. 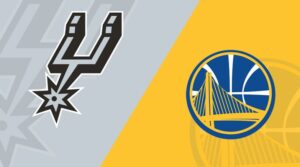 The Golden State Warriors lost to the Phoenix Suns, 125-113, in their last game. They had trouble on both ends of the court. If they want to beat the Spurs on the road, they will have to be more effective.

Even though Curry scored 16 of his team-high 32 points in the fourth quarter, the Warriors still lost to the Suns despite his hot shooting in his return after an 11-game absence.

While the end result was disappointing for the Warriors, it was good to see Curry back to full health and finish the game strong.

When the Warriors return to action this Friday in San Antonio after two days off, their star player, who was on a light minutes restriction Tuesday, should be free to play at will.

Golden State has been without Wiseman for the last five games as he recovers from a sprained left ankle, he sustained in a scrimmage back in December. The team, however, issued a statement Thursday saying that he will be able to participate in team practices “in the coming days,” as reported by Spears.