Mark Andrews (born September 6, 1995) is a tight end for the Baltimore Ravens of the National Football League (NFL). He attended Oklahoma University before being drafted in the third round by the Ravens in 2018. 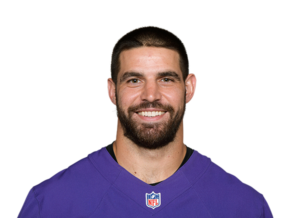 UPDATE 4: Andrews (shoulder/knee) caught six of eight targets for 63 yards in Sunday’s 13-3 win over the Panthers.

UPDATE 3: Andrews, who’s officially listed as questionable due to knee and shoulder injuries, is expected to play Sunday against the Panthers.

UPDATE 2: Andrews (shoulder/knee) was listed as a limited participant at practice on Thursday.

He appears to be questionable ahead of their Week 11 matchup, with more information to come closer to the game.

Andrews is dealing with a number of injuries, the majority of which he sustained during a game against the Tampa Bay Buccaneers.

He suffered a knee injury early in the game and was forced to leave after landing awkwardly on his right shoulder. The shoulder injury is described as a strain that is not serious.

He did not play in last week’s game and it is unclear whether he will play in Week 11 against the Carolina Panthers.

Because the nature of Andrews’ injury has not been revealed, there is no official timeline for his return.

Andrews was already limited by a knee injury he suffered before Baltimore’s Week 8 game against Tampa Bay. After landing awkwardly on his right shoulder, he was forced to leave the game.

Andrews strained his shoulder on the play, according to NFL Network’s Ian Rapoport.

Head coach Jim Harbaugh stated earlier this week that his tight end’s injury was not serious.

Lamar Jackson and the Ravens have been without their top pass-catching target for much of the last few weeks.

Tight end All-Star A slew of injuries have hampered Mark Andrews’ season. On the field, he’s been his usual productive self, scoring five touchdowns so far. His durability, however, has not improved as the year has progressed in comparison to previous years.