Running back Cam Akers has abruptly left the Los Angeles Rams, who cited personal reasons for his absence from Sunday’s game against Carolina. 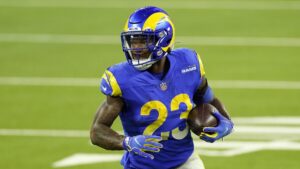 Akers was excused from practice on Thursday for personal reasons.

When asked about Akers’ situation on Friday, coach Sean McVay declined to elaborate, only saying the running back was not injured.

The third-year running back did not practice on Friday, and coach Sean McVay said Akers will miss Sunday’s game at SoFi Stadium against the Carolina Panthers.

When asked if Akers would continue to play for the Rams, McVay said, “We’re working through some different things right now, so hopefully you guys understand and respect that.”

McVay also stated that the team preferred to keep it “in-house,” later clarifying that personal reasons are “more like we’re dealing with things internally.” This is somewhat uncharted territory. He will be fine.”

Will the Rams look for another running back as the trade deadline approaches?

“I don’t know,” McVay said. “I wouldn’t say no, ever. We’ll always explore options if we feel like there’s chances to upgrade.

“That’s probably not something that’s at the forefront.”

The Rams, who are battling an injury-ravaged offensive line, are last in the NFL in rushing.

Akers worked out with the defending Super Bowl champions on Wednesday but did not practice on Thursday or Friday.

This season, Akers has rushed for 151 yards and a touchdown for the Rams, who have the NFL’s worst rushing offense at 62.4 yards per game.

By most statistical measures, Akers has been unproductive on the ground while running behind an offensive line that Akers, a second-round pick in 2020, leads the Rams in rushing with 151 yards and a touchdown on 51 attempts. He rushed for 33 yards on 13 carries in last Sunday’s 22-10 loss to the Dallas Cowboys.is missing three starters and two backups due to injury.

McVay told reporters earlier this season that he wanted to see more urgency from Akers, who missed nearly the entire 2021 season due to an Achilles injury.

Akers returned for the regular-season finale and participated in the postseason run to the Super Bowl, but he struggled to match his rookie output.

Akers, 23, showed promise in his rookie season, rushing for 625 yards and two touchdowns. He rushed for 171 yards against the New England Patriots, a career high.

Akers started all five games for the Rams this season, but he’s only averaging 3.0 yards per carry after gaining 33 yards on 13 attempts last week against Dallas.

According to the NFL’s Next Gen Stats, Akers has minus-0.98 rush yards per attempt, which is the league’s second-worst performance. He has only 86 yards after contact and has only broken one tackle this season.

Running backs Darrell Henderson and Malcolm Brown will be joined by Ronnie Rivers, who will be activated from the practice squad for the game, according to McVay.

The Rams are 2-2 heading into Sunday’s game at SoFi Stadium against the Carolina Panthers.

When asked if the Rams will be looking for a running back, McVay said, “I don’t know. I wouldn’t say no, ever. We’ll always explore our options if there’s chances to upgrade. That’s probably not something that’s at the forefront.”

Akers stated in training camp prior to this season that he was excited to show off his abilities.

“Whether it’s runs, passes, screens, whatever I need to do,” he said. “Whenever my number’s called, whether it’s from the slot, the outside receiver to the backfield, I’ll be ready, whatever it is.”

Akers was asked what the key to establishing the running game would be before the game against the Cowboys.

“Probably just sticking with it, not getting away from it, being true to the run,” he said. “I think that’s the biggest thing.”