Ending on a cliff The Baltimore Ravens’ Mark Andrews and running back Gus Edwards are both questionable for Sunday’s game against the Carolina Panthers at M&T Bank Stadium. 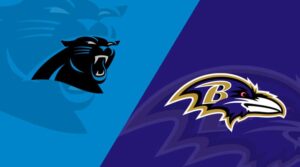 Gus Edwards (hamstring/knee) is listed as questionable for Sunday’s game against the Panthers.

He’ll almost certainly put his recovering right hamstring to the test ahead of Sunday’s 1:00 p.m. ET kickoff, and his availability will be known about 90 minutes before kickoff.

Edwards had three consecutive limited practices during Week 11 preparation, casting doubt on his status as he attempts to cut his DNP streak to one game with the help of a Week 10 bye.

If Edwards is limited or unavailable this weekend, Kenyan Drake will likely benefit the most, with Justice Hill and Mike Davis available for any remaining RB reps.

Meanwhile, Mark Andrews (shoulder) is listed as questionable for the Panthers game on Sunday.

His health is improving. On Wednesday and Thursday, he was limited in practice but fully participated on Friday.

“You never know,” Andrews said when asked if he would return to the field on Thursday. He admitted that missing the Ravens’ final game before the bye week was difficult, but as a veteran, he sees the big picture.

Andrews enters his fifth NFL season after finishing last season as the tight end with the most targets, receptions, yardage, touchdowns, and end zone targets (14). Andrews was the highest-scoring TE in fantasy by 38 points, but his splits with and without Lamar Jackson are worth noting.

Andrews was the highest-scoring TE in fantasy by 38 points, but his splits with and without Lamar Jackson are worth noting.

In 11 games with Jackson, Andrews averaged 7.9 targets and 14.9 fantasy points per game.

Donte Jackson (Achilles) is out for the season, as is PJ Walker (QB) (Ankle).