In the Vikings’ first Thanksgiving game, they will face the New England Patriots (6-4) at 7:20 p.m. Thursday. 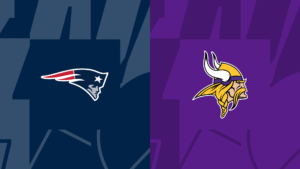 The Patriots’ starting right tackle, Isaiah Wynn (foot), has been ruled out. His backup, Yodny Cajuste (calf), was limited in practice on Wednesday and is questionable.

Evans went down with a concussion against Buffalo in Week 10 and was replaced by Booth, who made his first start against Dallas last week but is currently out with a knee injury.

Darrisaw suffered his second concussion in as many weeks last Sunday. In each game, Blake Brandel took his place.

The Vikings listed Dalvin Tomlinson (calf) as questionable. Tomlinson suffered the injury against Arizona in Week 8 and has been out since.

Outside linebacker Za’Darius Smith (knee) and receiver Justin Jefferson (toe) were not listed as injured and will play.

Minnesota held walk-through sessions instead of practices on Monday, Tuesday, and Wednesday.