DeAndre Hopkins has been one of the NFL’s busiest receivers since returning from a six-game suspension at the start of the season, but a hamstring injury could keep him out of Monday night’s game against the 49ers. 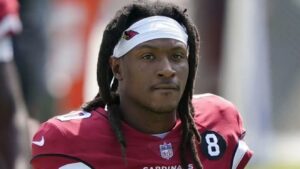 Hopkins (hamstring) finished the week with two limited practice sessions, but his status as “questionable” remains a legitimate concern with the Cardinals not playing until Monday night.

Coach Kliff Kingsbury initially suggested Hopkins was resting for “maintenance,” so let’s hope he was telling the truth.

At this point, it’s worth waiting for Hopkins. If you do, you must have an emergency fill-in available, such as Jauan Jennings, Robbie Anderson, or Greg Dortch. You could also use TE Trey McBride or RB Keaontay Ingram in your flex spot.

None of those guys are likely to do much, but having a chance at some points is preferable to a guaranteed zero.

Hopkins will be a must-start if he remains active.

No, this isn’t the first time we’ve seen him, Rondale Moore, and Marquise Brown on the same field, but with Zach Ertz (knee) out for the season, there should be plenty of targets to go around in Arizona’s uptempo offense, even if Colt McCoy starts in place of Kyler Murray.

If Hopkins is ruled out, Moore and Brown, both capable starters, should see increased opportunities. It could also mean more opportunities for McBride, who has some underappreciated talent.

This article will be updated with Hopkins news until the official active/inactive report is released on Monday around 6:45 p.m. ET.

The Cardinals are also concerned about Zach Ertz’s injury.

Kliff Kingsbury, the Cardinals’ head coach, confirmed on Wednesday that Ertz (knee) is scheduled for surgery and will miss the rest of the 2022 season.