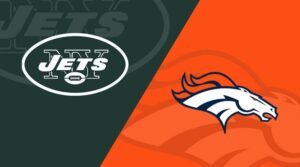 Because of an ankle injury, defensive end Jermaine Johnson missed practice on Wednesday, which means the Jets will likely be without him again this week when they play the Denver Broncos

The Broncos just had a walkthrough after a Monday night overtime game in Los Angeles, so the injury report is only an estimate.

Russell Wilson, one of the five Denver Broncos players labeled as questionable for Sunday’s game against the New York Jets.

Since each of the five makes a significant contribution, it is imperative that these guys stay healthy. Quinn Meinerz, Josey Jewell, DeShawn Williams, and D.J. Jones from the defensive line, as well as linebacker Quinn Meinerz, are all in doubt.

Meanwhile, safety Caden Sterns was limited in practice at first but did not participate on Friday. He’s listed as doubtful, which means he won’t play this week. Everyone else appears to be prepared.

The Jets will not play wide receiver Elijah Moore because he has requested a trade. Jermaine Johnson, a defensive end, is the only other player who has been ruled out. Safety Ashtyn Davis was also listed as questionable with a hamstring injury.