David Njoku (born July 10, 1996) is a tight end for the Cleveland Browns in the National Football League (NFL). He played football for Miami University (FL). He was chosen by the Browns in the first round of the 2017 NFL Draft.

What is David Njoku’s injuries? 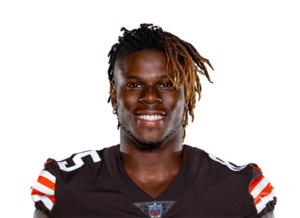 UPDATE 2: Njoku caught five of seven targets for 29 yards and a touchdown in the Browns’ 23-17 overtime win over the Buccaneers on Sunday.

UPDATE: David Njoku (ankle) caught two of three targets for 17 yards in the Browns’ 31-23 loss to the Bills on Sunday.

David Njoku’s return from a two-game absence that coincided with the Week 9 bye was relatively uneventful.

Njoku (ankle) worked out sparingly at the end of the week and is listed as “questionable” for Sunday’s game against the Bills.

Njoku has missed the Browns’ last two games, and his return would give the offense a much-needed boost.

Njoku assured reporters that he will be fine on Sunday, and we will believe him. The Bills have done a good job of defending tight ends this season, allowing the seventh fewest FPPG to TEs (7.2), but given the lack of consistent tight end production in fantasy, he’s still worth a start because the targets are there.

If Njoku misses his third straight game, Harrison Bryant will take over as Cleveland’s primary tight end, but he’s a much riskier fantasy option.

The veteran tight end had his lowest reception and yardage totals since Week 1 against the Panthers, but a Week 12 home game against a Buccaneers defense that can be vulnerable to tight ends could provide an opportunity for a production boost.