Friday at 8:30 p.m. EST is the start time for this Western Conference matchup between the Phoenix Suns and the Pelicans in New Orleans. 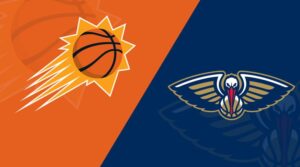 The season has been difficult for New Orleans because so many of their star players have been hurt. The starting lineup does not currently include star forward Brandon Ingram, who has missed the last five games due to a toe injury. Additionally, injuries have cost them CJ McCollum and Zion Williamson at different points in time.

Brandon Ingram (toe) won’t be able to participate in Friday’s game against the Suns, according to Will Guillory of The Athletic.

Ingram will miss his sixth straight game as he continues to struggle with a sprained left toe.

On Friday against the Suns, Herbert Jones (ankle) won’t be able to play.

Jones will be absent from Friday’s game for the fourth time in a row due to a sprained left ankle. Dyson Daniels has started each of the three games in his absence.

The Suns had a chance to stake a claim when the Eastern Conference-leading Celtics came to Phoenix on Wednesday night. Chris Paul, the team captain, returned to Phoenix, which was in first place in the Western Conference, following a protracted absence due to a heel injury.

It should be obvious that the game did not go as planned given that the Celtics thrashed the Suns, 125-108.

The game against the Pelicans on Friday won’t feature Duane Washington (hip), according to Gerald Bourguet of GoPHNX.com.

Washington’s left hip muscle is strained, so he will miss his third straight game. The next game for Washington will be on Sunday in New Orleans, but Chris Paul is back in action for Phoenix, so he probably won’t start every game.