The Knicks (12-13) will be going for their third straight win when they take on the Hornets (7-18) on Friday night. In its last 10 games against the New York Knicks, the Charlotte Hornets have a 6-4 record. 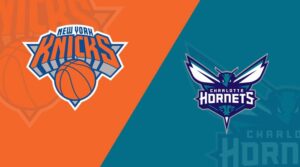 The Hornets are coming into this match with a three-game losing streak after having a difficult week. They will try to snap their winning streak with a victory over the Knicks, which would be their second triumph in the previous five games.

LaMelo Ball (ankle) will miss Friday’s game against the Knicks.

Ball’s left ankle injury is still healing, so it’s unclear when he’ll be able to resume playing. Due to the absence of Dennis Smith (ankle), Terry Rozier and Theo Maledon should be the Hornets’ top two point guards on Friday.

Mark Williams (ankle) has been ruled out for Friday’s game against the Knicks.

Williams’ left ankle has sprained, forcing him to miss his fourth straight game. The rotation in Charlotte shouldn’t be impacted by his continued absence.

Smith will miss his seventh straight game as a result of a sprained left ankle. Although a return date has not yet been set, he will play next on Sunday against Philadelphia.

The Knicks are currently playing well and have won their last two games. They’ll try to keep the momentum going by defeating the Hornets, which would be their third straight win and fourth victory in the last six games.

During the game against Atlanta on Wednesday, Toppin injured his knee. In two to three weeks, Obi Toppin (knee) is expected to have another examination.

For Friday’s matchup with Charlotte, Ryan Arcidiacano (ankle) is not available. With a sprained left ankle, Arcidiacano will miss his fifth straight game.