The final injury report for the Week 7 game between the Cleveland Browns and Baltimore Ravens follows a week that began with 18 players out injured and gradually improved. 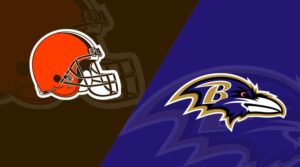 Note: The majority of the ailments will be revealed by the inactive report, but we’ll also learn how limited some of the players are even if they can play on Sunday. That inactive report will be available 90 minutes before to kickoff.

The Cleveland Browns and Baltimore Ravens are preparing for what could be a difficult divisional game in Week 7. After a difficult Week 6 setback to the New York Giants that brought their record to 3-3, they’ll aim to bounce back.

In advance of Week 7, Baltimore published their second injury report of the week on Thursday. While there was some positive news, such as quarterback Lamar Jackson participating in a full practice after being limited on Wednesday due to a hip injury, there was also some unfavorable news, including the absence of tight end Mark Andrews and running back J.K. Dobbins for their second consecutive practice day.

The Browns hope to have a top edge rusher back in action on defense Sunday against the Ravens despite being missing one Pro Bowl player on each side of the field.

For Week 7 in Baltimore, RG Wyatt Teller (calf) and CB Denzel Ward (concussion) have both been declared out. As for the DEs Jadeveon Clowney and Isaac Rochell, they were listed as questionable, while OT Joe Haeg (concussion) was also ruled out. While Ward, a two-time Pro Bowler, will miss his second consecutive game and remain in concussion protocol, Teller, a Pro Bowler in 2021, will miss his first game of the season.

Teller is anticipated to be replaced on the offensive line by fourth-year pro Hjalte Froholdt, who will make his first professional start. Last week, when Teller was forced out of the game against the Patriots in the second quarter, he took Teller’s place and played admirably, playing the last 55 snaps and receiving a 69.6 rating from Pro Football Focus.