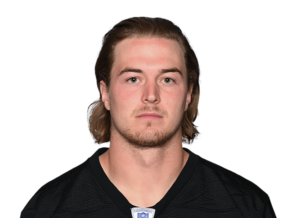 UPDATE (DEC. 24): Pickett will play against the Raiders on Saturday after confirming Monday that he was cleared by an independent neurologist and removed from the NFL’s five-step concussion protocol, according to Dale Lolley of the Steelers’ official website.

Pickett (concussion) is listed as a full participant on the Steelers’ official site’s estimated practice report for Tuesday, according to Dale Lolley.

While the Steelers did not practice on Tuesday, coach Mike Tomlin stated that he expects Pickett to return and start against the Raiders on Saturday.

Of course, the rookie must first pass the NFL’s concussion protocol, which had not been completed as of Tuesday morning, according to Tomlin.

UPDATE (DEC. 24): Wilson (hip) is listed as questionable for Sunday’s game against the Packers after only limited practice this week, according to ESPN.com’s Rob Demovsky.

Wilson (hip) is close to playing Saturday against Buffalo and is considered day-to-day moving forward, according to Travis Wingfield of the Dolphins’ official website.

Wilson missed his first game of the season in Week 15 due to a hip injury suffered against the Chargers in Week 14, but it appears the running back will be able to play on Christmas Day against the Packers. However, Miami’s injury report during Week 16 practice should shed some light on Wilson’s availability for that game.

According to Brooks Kubena of the Houston Chronicle, the Texans placed Pierce (ankle) on injured reserve on Saturday.

Pierce suffered a high-ankle sprain last Sunday against Dallas, and while it was initially thought that he’d be out for only one to two weeks, the tide has turned, and he’ll now miss the final four games of the season.

UPDATE (DEC. 24): Wilson (concussion) is not listed on the Week 16 injury report for the Rams game on Sunday.

Wilson (concussion) did not play against the Cardinals last Sunday, according to Aric DiLalla of the Broncos’ official website.

Wilson has reportedly completed the NFL’s concussion protocol, but coach Nathaniel Hackett stated on Friday that “as an organization, we’ve decided to give him another week.”

As a result, Brett Rypien will start at quarterback for the Broncos this weekend, with Wilson hoping to return in Week 16 against the Rams.