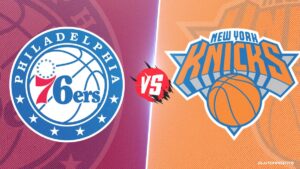 Thybulle (ankle) is questionable for Friday’s game against the Knicks, according to Kyle Neubeck of PhillyVoice.com.

OUT: De’Anthony Melton (Back).

This season, Harden’s teammate and fellow All-Star Joel Embiid has missed games due to illness.

Emiid has been out with the flu this week, according to Sixers head coach Doc Rivers.

The five-time All-Star center is averaging 27.2 points and 9.5 rebounds this season. Embiid missed Philadelphia’s games against Washington on Monday and Wednesday.

James Harden has a right foot tendon strain and is expected to be out for about a month.

The Philadelphia 76ers’ James Harden is expected to miss about a month due to a right foot tendon strain.

The 2018 NBA MVP appeared to sustain the injury during the Sixers’ game against the Washington Wizards on Wednesday night at Capital One Arena, according to The Associated Press.

During a drive to the basket, Harden stumbled and grimaced in pain. He returned to the game and finished with 24 points.

Harden has averaged 22 points and 10 assists through the first nine games of the season. He battled hamstring tightness last season.

Tyrese Maxey is in good health and should be able to play immediately.

The Knicks have not released any specific injury reports, but they are expected to have the best lineup against the 76ers.

With a win against Philadelphia, New York hopes to snap a three-game losing streak.