The Indiana Pacers will look to bounce back from a narrow loss to the Denver Nuggets on Saturday night when they host the Toronto Raptors. Before falling 122-119 to the Nuggets on Wednesday, the Pacers had won four of their previous five games.

Will Pascal Siakam playing vs Pacers? 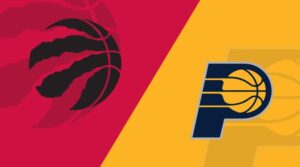 The Indiana Pacers were not expected to be a title contender this season, so their 1-4 start was not surprising. Following that, the Pacers won four of their next five games, including victories over Washington, Brooklyn, Miami, and New Orleans.

Trevelin Queen missed the game against Sioux Falls on Thursday due to a knee injury. He is also listed as questionable for Saturday’s game against the Raptors.

Meanwhile, Daniel Theis has been suffering from knee pain since before EuroBasket this summer and has yet to make his debut.

He will be out of commission for an extended period of time as a result of his decision to have surgery, but this will benefit his knee situation in the long run.

The Toronto Raptors have been playing consistently well since losing two of their first three games of the season. The Raptors have won six of their last nine games.

On Sunday, Pascal Siakam was diagnosed with a right adductor strain and will be evaluated again in two weeks.

Siakam had a strong start to the season, averaging 24.8 points, 9.3 rebounds, 7.7 assists, and 1.4 three-pointers in 35.7 minutes per game. His absence will be difficult for fantasy managers to manage.

According to The Athletic’s Blake Murphy, Justin Champagnie (back) has been assigned to Raptors 905 and will miss Friday’s game.

Champagnie has alternated between the 905 and their NBA affiliate Toronto Raptors, and despite being demoted to the G League, he will be unavailable on Friday.

His next appearance will be against the Swarm on Tuesday.