Through the first half of the 2022-23 NBA season, the Indiana Pacers have been one of the most surprising teams. At the moment, with a 23-19 record, they are the seventh best team in the Eastern Conference. This puts the franchise in an odd spot. 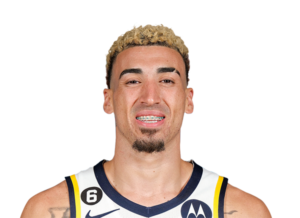 The Indiana Pacers has the pieces to put together an interesting trade package if they decide to make a move to improve the roster before the trade deadline. The Pacers have three first-round selections in the 2023 NBA Draft: their own and the projected picks of the Boston Celtics and Cleveland Cavaliers.

One player who might be included unexpectedly is Chris Duarte. According to Jake Fischer of Yahoo! Sports, the Pacers have seemingly changed their minds about the No. 13 pick in the 2021 NBA Draft.

“And while the Pacers had marked second-year guard Chris Duarte as off limits in trade conversations with some opposing personnel, multiple front office figures told Yahoo Sports that Indiana has since made the 25-year-old available in recent dialogue.”

Indiana’s willingness to trade for Duarte despite having previously declared him off-limits in the offseason demonstrates the team’s commitment to the possibility of a roster upgrade.

The Pacers shopping him around to see what kind of value he may have makes some sense, given that he will turn 26 in June of this year. Although his playing time has been reduced by nearly half, his overall output has decreased.

His shooting percentage has dropped along with the rest of his statistics, and this has a devastating effect on his market value.

But a rebuilding team that can guarantee him regular wing time might be interested in him. Indiana has enough cap space that they don’t need an exact salary match to make a trade for an established veteran, making Duarte and some of their accumulated draft capital an intriguing package.