On Monday, the Rockets will face the Spurs in a battle for Texas supremacy. Earlier this season, the Spurs defeated the Rockets 118-109.

The latest injury status of Jae’Sean Tate and Romeo Langford 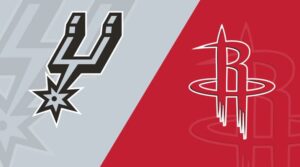 You can read also:

This season, the Houston Rockets are 9-20, tied for last place with the San Antonio Spurs. In a perfect matchup, they’ve played the same teams as the Spurs in their last two games, albeit in reverse order. They lost 111-108 as a 3-point underdog against the Heat at home on Thursday. Then, on Saturday, as a 3-point underdog, they were defeated 107-95 by the Blazers.

Jae’Sean Tate (ankle) worked out on Monday but does not yet have a return date.

Tate was cleared to run on the court last week and is still training, but the Rockets are unsure when he will be able to return. He appears to need to increase his workload before returning to game action.

Garrison Mathews (illness) will miss the Spurs game on Monday. Due to a non-COVID illness, Mathews will miss his second game in a row. He hasn’t been a popular fantasy option this season, so his absence on Monday will have little effect on the Rockets’ rotation.

The San Antonio Spurs have lost their last two games after winning three in a row, falling to the Portland Trail Blazers and the Miami Heat. The Spurs are now 9-20 on the season, tying Houston for last place in the Western Conference. They trail first-place Memphis by ten games.

Due to a stomach illness, Romeo Langford has been listed as questionable for Monday’s game against the Rockets, according to independent NBA writer Matthew Tynan.

Langford has missed the last two games due to an ankle injury, but the Spurs have listed him as having a “stomach illness” on the latest injury report.

With Josh Richardson (personal) already ruled out, Langford could reclaim a significant role if he can take the field. Langford had started three straight games prior to the ankle injury, averaging 11.0 points, 4.3 rebounds, 2.0 assists, 1.3 steals, and 1.0 blocks (27.3 MPG).

Due to personal reasons, Josh Richardson has been ruled out of Monday’s game against the Rockets.

It’s unclear what’s bothering Richardson, but he’ll miss his second game in a row on Monday. His absence frees up 20-to-25 minutes in the Spurs’ rotation, which Malaki Branham and Romeo Langford could fill (both of whom are out due to illness).