This is the third and final meeting between these two teams this season, with the Jazz winning the first. On Thursday, the Utah Jazz will play the Houston Rockets in Houston, Texas.

Jae’Sean Tate and Collin Sexton NOT READY for Rockets – Jazz 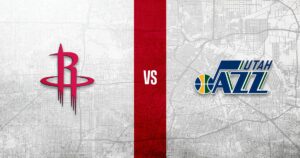 He has an ankle injury and there is no set date for his return.

The Rockets are coming off a loss to the Dallas Mavericks. They struggled offensively, shooting only 31% from three-point range. They will need to be more efficient in this game if they are to compete with the Jazz at home.

The Houston Rockets are currently in last place in the Western Conference, trailing the Denver Nuggets by 15 games. They score 109.3 points per game and shoot 44.4% from the field. This is the second-lowest point total per game and team shooting percentage in the league.

This season, the Rockets have allowed 115.7 points per game while their opponents have shot 47.2% from the field. This team ranks 19th in points allowed per game and 18th in shooting percentage allowed.

Due to a hamstring injury, Sexton will be out for at least a week.

The Jazz are coming off a loss to the Sacramento Kings. They struggled on defense, and if they want to challenge the Rockets on the road, they’ll need to get more consistent stops in this one.

In the Western Conference standings, the Utah Jazz are currently 6.5 games behind the first-place Denver Nuggets.

They score 117.2 points per game and shoot 47% from the field. This is the team with the fourth-highest scoring average and the 15th-highest shooting percentage.

The Jazz are allowing 116.6 points per game on defense, and their opponents are shooting 48.5% from the field. This is the 25th lowest shooting percentage allowed and the 23rd fewest points allowed per game.