Rhamondre Stevenson (born February 23, 1998) is an American football running back for the National Football League’s New England Patriots (NFL). He attended Oklahoma, where he was a bowl game MVP, and was drafted by the Patriots in the fourth round of the 2021 NFL Draft. 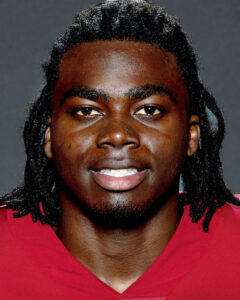 UPDATE (Jan. 6): In the Patriots’ 23-21 win over the Dolphins on Sunday, Stevenson rushed eight times for 42 yards and caught two of four targets for nine yards.

UPDATE (DEC. 24): Rhamondre Stevenson (ankle) is listed as questionable for Saturday’s game against the Bengals.

UPDATE (Dec. 18): According to Ian Rapoport of NFL Network, Stevenson (ankle) is listed as questionable and a game-time decision for Sunday’s game against the Raiders, but he has a “good chance” of playing.

Though Stevenson appears to be on track for the Week 15 game, his status will ultimately be determined by a pregame workout before the Patriots make a decision 90 minutes before kickoff at 4:05 p.m. ET.

Due to an ankle injury, the running back was limited to just 13 snaps in the Patriots’ Week 14 win over the Cardinals.

Meanwhile, Damien Harris (thigh) has been upgraded to out against the Raiders, so if Stevenson is available, he may not face much competition for work from rookies Pierre Strong or Kevin Harris.