The Bucks will play the Pelicans in New Orleans on Monday. These two teams have had strong starts to the season, but this will be their first meeting. 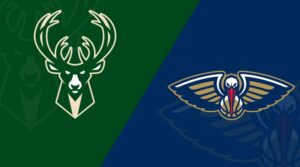 The New Orleans Pelicans are coming off a 118-114 defeat to the Phoenix Suns. Despite consistently leading, they crumbled in the fourth quarter of that game. They will need to improve their defensive play if they are to take care of business at home.

Brandon Ingram (SF) is out due to a toe injury. E.J. Liddell (SF) is out indefinitely with a knee injury.

The Bucks are coming off a 123-97 victory over the Utah Jazz. They looked fantastic on both ends of the court, and they will need to stay efficient if they are to challenge the Pelicans on the road.

Giannis Antetokounmpo (knee) is listed as doubtful for Monday’s game against the New Orleans Pelicans.

Antetokounmpo did not play in Saturday’s win over Utah, but his absence appears to have been mostly precautionary. Expect the MVP candidate to be available for his full workload as Milwaukee begins a four-game week with no back-to-back sets.

Khris Middleton (knee) will be out against the Pelicans on Monday.

Middleton sat out Saturday’s game against Utah with a sore knee, and his absence on Monday suggests that the Bucks are doing more than being cautious with the veteran wing. Middleton should be considered day-to-day following Monday’s game as the Bucks prepare for a four-game road trip to Cleveland (Wednesday), Brooklyn (Friday), and Boston (Saturday) (Sunday).

Joe Ingles will still miss Saturday’s game against Utah, but he has been cleared to play on Monday after participating in 5-on-5 activities on Saturday without incident. Given that Ingles has been out for 10 months, he will most likely be subjected to significant restrictions as he works his way back to full strength.