As we approach Week 18 and the second round of the playoffs, fantasy football managers must continue to make roster changes to reach the season’s pinnacle. 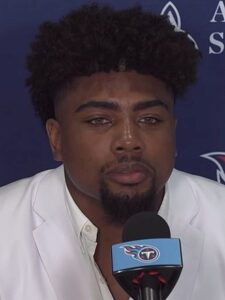 Treylon Burks had a productive game against the Cowboys in Week 17 with four catches for 66 yards on eight targets and one carry for 20 yards.

The Dallas game was with Joshua Dobbs at quarterback, and hopefully Dobbs can connect with Burks again in Week 18. And the Jaguars have allowed four receivers to score at least 14 PPR points in their past five games.

Greg Dortch didn’t have a good Fantasy outing in Week 17 at Atlanta with four catches for 15 yards, but he did have 10 targets. And hopefully he gets that many targets again in Week 18 at San Francisco.

The 49ers have allowed six receivers to score at least 12 PPR points in their past three games, so Dortch could be a No. 3 PPR Fantasy option in Week 18.

If you told me Tuesday morning that the Giants were playing their starters in Week 18 at the Eagles for a full game then I’d say James and Isaiah Hodgins (13 percent rostered) are both worth using as high-end No. 3 receivers in the majority of leagues.

James has scored at least 17 PPR points in three of his past four games and has three games with at least seven targets, seven catches and 61 yards, including two touchdowns.

But because of the uncertainty that the Giants could rest guys for the playoffs, we have to be cautious with James and Hodgins as Fantasy options.

Toney had a productive game for the Chiefs in Week 17 against Denver, catching four passes for 71 yards on four targets, but he only played 16 of 53 offensive snaps and remains difficult to trust. Having said that, you can see his explosiveness every time he touches the ball, and he has the potential to be electric on the turf in Las Vegas.

He’s worth adding and using as a No. 3 Fantasy receiver in Week 18, and the Raiders have allowed at least 12 PPR points to six receivers in their last five games.