The Miami Dolphins, Seattle Seahawks, and San Francisco 49ers are among the teams that have risen to the top of the NFL power rankings recently. Teams like the Tampa Bay Buccaneers and the New York Giants are prime examples of the fallers. Let’s take a look at the Week 9 NFL power rankings. 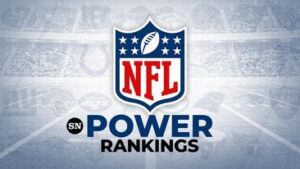 The Buffalo Bills continue to lead the NFL power rankings, with the other top teams receiving little consideration.

Buffalo used the Green Bay Packers’ defense to establish its ground attack on Sunday Night Football. That’s exactly what a Super Bowl contender should look like.

The acquisition of Robert Quinn will be the most significant in-season addition made by any NFL team.

Already stacked with pass rushers, Philadelphia added another chess piece that will wreak havoc on any opponent it faces. When you combine that with the Jalen Hurts-AJ Brown offense, this is by far the best team in the NFC.

There are risks associated with the Ka’Darius Toney trade, but the Kansas City Chiefs offense is an ideal fit for him.

Throughout the offense, there are receivers with complementary skills, resulting in a passing attack that is just as effective as the Tyreek Hill era. Kansas City should demonstrate its dominance against the Titans in Week 9.

The Dallas Cowboys have one flaw that has caused them to drop a tier in the NFL power rankings for Week 9.

Despite its defensive talent, Dallas simply cannot stop the run, and there is now a weakness in the slot.

These are the kinds of issues that put the Cowboys at a disadvantage when compared to the Super Bowl favorites.

The Baltimore Ravens have yet to put together a complete performance this season, but their high points rank alongside the Kansas City Chiefs and Philadelphia Eagles.

The Minnesota Vikings deserves to be near the top of the NFL power rankings based solely on their record.

Nonetheless, according to NFL analyst Justis Mosqueda, Minnesota ranks 20th in ANY/A total. The offense is fantastic, but Kirk Cousins struggles on big stages, and the defense is subpar. That is what distinguishes Minnesota from the top NFL teams.

This is the type of football we’ve come to expect from the Tennessee Titans. Allow Derrick Henry to carry the entire offense, eat up the clock, and pound opposing defenses to death.

Tennessee’s defense, on the other hand, makes crucial stops and generates turnovers. It’s a winning formula for the AFC South. Just don’t expect it to fare well against Kansas City in Week 9.

Kyle Shanahan had this in mind when he acquired Christian McCaffrey. It also helps that the San Francisco 49ers defense was given a “get right” game against the Los Angeles Rams offense.

All of this is a step forward, but the quarterback disadvantage is a huge burden that is dragging San Francisco down.

Joe Burrow, quarterback of the Cincinnati Bengals, is now under more pressure to perform without Ja’Marr Chase, and he won’t be able to do so if the offensive line is as porous as it was on Monday Night Football.

Imagine how much better the Miami Dolphins look with their starting quarterback at the helm. In Sunday’s victory, Mike McDaniel’s offense ran on all cylinders, reminding fans of the unstoppable unit it was earlier in the season.

However, it is the shaky Dolphins defense that is causing concern right now. Still, ranking No. 10 in the NFL power rankings is a significant improvement over last year.

The analogy to a college football team seems appropriate. The Seattle Seahawks have a good mix of youth and veterans, but their energy and competitiveness shines through every week. Consider a Detroit Lions team with a much better quarterback and defense. This is why Seattle is a legitimate playoff contender.

Let Week 8 serve as a reminder of why the New York Giants will not commit to Daniel Jones on a long-term basis.

He is far more reliable than the quarterback seen in previous seasons, but Brian Daboll is treating the offense with caution due to Jones.

One can only speculate as to where the New Orleans Saints would rank in the NFL power rankings if they weren’t cursed.

Injuries are the biggest issue, with so many key starters out, including Mike Williams, Corey Linsley, Rashawn Slater, and Joey Bosa.

In the regular season, the Los Angeles Rams have no answer for the San Francisco 49ers’ defense or offense.

The Rams suffered their third loss in four games on Sunday, demonstrating that the reigning Super Bowl champions aren’t even close to that level right now, and may never be.

Following an abysmal performance against Chicago, Bill Belichick got his team back on track against the opponent he enjoys facing more than any other.

With a winnable Week 9 matchup against the Colts, New England is in a good position to improve from 1-3 to 5-4 before the bye week.

Is this a watershed moment for the New Orleans Saints? In the face of trade rumors, Alvin Kamara put in his best game of the season, sparking an offensive explosion.

It’s incredible that the Atlanta Falcons are in first place heading into Week 9. Most expected this team to compete for the No. 1 pick; instead, if the regular season ended today, it would host a playoff game.

Is it going to last? Probably not, but Arthur Smith is an excellent head coach.

DeAndre Hopkins has returned, removing an excuse for Kyler Murray’s underwhelming 2022 season. At 3-5, it’s fair to say that every dollar Arizona spent on its general manager, coach, and quarterback appears to be a waste right now.

Talk about the ideal welcome home. Terry McLaurin simply accounted for 113 receiving yards and made the game-changing play in the final seconds that set up the win in his return to Indiana.

Russell Wilson and the Denver Broncos deserve credit for rallying on Sunday, transforming a lifeless first half performance into a much-needed comeback.

The offensive approach change is worth a slight bump in the NFL power rankings, but Green Bay still does not appear to be a legitimate playoff threat.

On Monday Night Football, the Cleveland Browns, particularly Myles Garrett, may have saved the season. After defeating the Cincinnati Bengals and improving to 3-5, there are at least some scenarios in which this team can still make the playoffs when Deshaun Watson returns.

All in all, Sam Ehlinger made a respectable debut. With the game on the line, he made the throw the Indianapolis Colts needed, but it was dropped. Unfortunately, everything we’ve seen from the Colts in recent weeks indicates that they simply aren’t a good team.

The Chicago Bears are finally making proper use of Justin Fields. Since the offseason, we’ve been critical of Chicago’s coaching staff and front office, but there are finally signs of progress.

While being first in the NFC South was nice, losing was in the Carolina Panthers’ best long-term interests. P.J. Walker has shown some promising signs, but owner David Tepper wants a franchise face, which will almost certainly come with a first-round pick.

It might be time to start having an awkward conversation about Trevor Lawrence. He is one of the worst quarterbacks in the NFL this year inside the red zone, and his numbers in critical situations are equally concerning.

It’s possible that the generational prospect will end up being nothing more than an above-average NFL quarterback.

There is going to be speculation about Mike Tomlin being on the hot seat, but the Pittsburgh Steelers head coach being fired would be a mistake. After years of kicking the can down the road on a rebuild, Pittsburgh’s roster is now one of the worst in the NFL and it takes time to get better.

The Houston Texans aren’t going to be aggressive sellers at the NFL trade deadline, so fans shouldn’t expect a large influx of draft capital.

The Detroit Lions and Houston Texans will compete for last place in the NFL power rankings and the No. 1 pick in the 2023 NFL Draft.