Let’s all update the NBA power rankings at the same time. 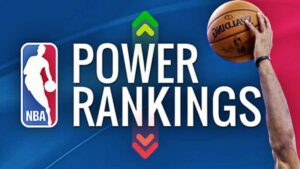 The Pistons have lost six of their last eight games heading into Sunday’s game against the Lakers.

Orlando won back-to-back games against the Clippers and Raptors, thanks to Paolo Banchero and Franz Wagner.

The Rockets defeated the Suns and the 76ers before falling to the Spurs.

The Hornets are still struggling. They’ve dropped four straight, including a 121-102 defeat to the Knicks on Friday.

On Friday, Anthony Davis had 31 points and 12 rebounds against the 76ers, but the Lakers lost their third game in a row.

OKC’s Shai Gilgeous-Alexander continues to put up big numbers. On Monday, he scored 35 points in a win over the Hawks.

Despite big games from Bradley Beal and Kristaps Porzingis, the Wizards have lost five straight and eight of nine.

The Blazers have lost four of their last six games, including a 121-120 loss to the Nuggets on Thursday despite Damian Lillard’s 40 points.

Julius Randle scored 30 points in consecutive games against the Hawks and Hornets. Against Atlanta, he had 34 points and 17 rebounds.

The Timberwolves have won three of their last four games to return to.500. D’Angelo Russell had 30 points in Friday’s win over Utah.

The Warriors won five of their last six games before falling to the Pacers and Jazz back-to-back. Against Indiana, Stephen Curry was held to 12 points on 3-of-17 shooting.

Joel Embiid had 38 points and 12 rebounds to lead the 76ers to an overtime victory over the Lakers on Friday.

Despite Pascal Siakam’s 36 points, nine rebounds, and seven assists, the Raptors fell to the Orlando Magic 113-109 on Friday.

The Pacers have cooled off in recent weeks, losing six of ten games after starting the season 10-6.

The Clippers have lost four of their last five games. Kawhi Leonard has played in seven games and has averaged 11.4 points, 4.7 rebounds, and 3.1 assists.

After going 11-7 to start the season, the Hawks have lost three in a row and six of their last eight games. Despite Trae Young’s 33 points and nine assists, the Nets defeated them 120-116 on Friday.

Utah has lost two of its last three games and seven of its last ten. Jordan Clarkson and Lauri Markkanen led the Jazz to victories over the Clippers, Pacers, and Warriors, but Utah has now lost 10 of its last 15 games after starting the season 10-3.

Despite Luka Doncic’s 33 points and 11 assists in Friday’s loss to the Bucks, the Mavericks had won four of their previous five games. Doncic averages 32.9 points, 8.6 rebounds, and 8.7 assists per game.

The Nets are on a roll right now, thanks to Kevin Durant, Kyrie Irving, and Ben Simmons. They’ve won six of the last seven games and nine of the last twelve. Irving scored 33 points against the Hornets, while Durant scored 34 against the Hawks.

De’Aaron Fox was out with a foot injury in Friday’s 106-95 win over the Cavaliers, but the Kings won anyway thanks to a huge performance from Domantas Sabonis. They’ve won four of their last five games and 14 of their last 20 since going 0-4 to start the season.

Nikola Jokic had 33 points, 10 rebounds, and nine assists to help the Nuggets snap a three-game losing streak by defeating the Blazers 121-120 on Thursday. On Saturday, they will face Utah.

Donovan Mitchell scored 43 points against the Lakers but sat out against the Kings due to a leg injury. The Cavs have lost two of their last three games, but they remain a top team under J.B. Bickerstaff.

The Grizzlies are one of the league’s hottest teams. They’ve won five straight and seven of their last eight games. Ja Morant leads the team in scoring with 28.3 points, 6.6 rebounds, and 7.6 assists per game.

The Suns have dropped three straight games to the Mavericks, Celtics, and Pelicans. They must play the Pelicans again on Sunday. Chris Paul, thankfully, has returned from injury. On Friday, he had 24 points, eight rebounds, and seven assists against New Orleans.

Zion Williamson is on a roll, as are the Pelicans, who have won six of their last nine games. Williamson had 35 points, seven rebounds, and four assists in the Suns’ 1288-117 victory on Friday.

The Celtics have won three straight and eight of their last nine games, led by Jayson Tatum and Jaylen Brown. Going into Saturday’s game against the Warriors, they lead the NBA in scoring (120.8 ppg) and point differential (+8.8).