Wide receiver Mike Williams appeared to suffer an ankle injury in the fourth quarter of Sunday’s game against the Seattle Seahawks. 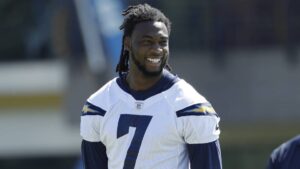 He is likely to miss “a few weeks” due to the injury, according to Pelissero. Staley confirmed on Monday that Williams will be out for weeks, not days.

Williams writhed in pain before rising but limped off the field with the help of trainers, not putting any weight on his right leg.

He completed the game contributing all Chargers wideouts with seven receptions for 86 yards and a touchdown.

Sunday’s blows continued a trend for a Chargers team that has been plagued by injuries all season.

Keenan Allen (hamstring) returned to the lineup on Sunday after missing the previous five games, but only on a limited basis.

Pass rusher Joey Bosa (groin) had surgery earlier this season and is still out until his impending return, as is left tackle Rashawn Slater (biceps), whose return may be contingent on the team’s playoff status late in the season.

This season, Williams has been Justin Herbert’s leading target, going to lead all receivers with 37 receptions for 495 yards and three touchdowns. Even when he isn’t targeted, his deep-threat abilities are crucial to the Chargers’ offensive scheme.

The Chargers (4-3) have a Week 8 bye, which is welcome given their current WR situation. L.A. returns to action in Week 9 with a road game against the Atlanta Falcons, and Williams is unlikely to be available for the trip.