LeBron James is listed as a possibility for the Minnesota Timberwolves’s game against the Los Angeles Lakers on Friday. 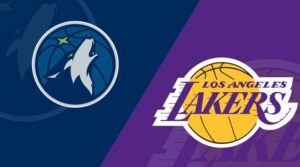 On Friday evening, the Los Angeles Lakers will face the Minnesota Timberwolves at the Target Center.

Their best player (LeBron James) is mentioned as injured for the game. However, the four-time NBA Champion is listed as probable (left foot), so he will almost certainly start.

The Lakers have yet to win their first game of the season, falling to the Golden State Warriors, Los Angeles Clippers, Portland Trail Blazers, and Denver Nuggets.

The Lakers finished 33-49 last season, missing the NBA Playoffs for the second time in four seasons.

So far this season, they don’t appear to be a playoff team. James is in his 20th NBA season, and his fifth with the Lakers.

The Timberwolves enter the night with a 3-2 record in their first five games.

They’ve defeated the Oklahoma City Thunder twice and the San Antonio Spurs once (their two losses came against the Utah Jazz and Spurs).

Anthony Edwards, D’Angelo Russell, Karl-Anthony Towns, and Rudy Gobert are among the team’s many talented players. They went 46-36 last season and made the NBA Playoffs for the first time since 2018.

They acquired Gobert in an offseason blockbuster trade with the Jazz, so they are still getting used to playing with the All-Star center.

The Timberwolves are experiencing a run of good health, with only one player possibly ruled out for tonight’s game. Kyle Anderson is OUT with a back injury and will be a game-time decision in this matchup.

With an injury report that is generally clean, the Wolves will look to keep their starting five from their win over the Spurs.

D’Angelo Russell (G) and Anthony Edwards (G) will form a dynamic backcourt, with JaDaniels (F) starting as the team’s small forward. Karl-Anthony Towns (F) and Rudy Gobert (C) round out their starting lineup.

Given the importance of this game, the Lakers will try to ensure that all of their stars play. Westbrook may be OUT longer than usual due to hamstring injuries, but he is listed as a game-time decision alongside LeBron James and Anthony Davis.

If Westbrook, James, and AD are unable to play, Austin Reaves, Troy Brown Jr., and Damion Jones will most likely take their place.