The Utah Jazz (6-3) will look to snap a three-game road losing streak when they face the Los Angeles Lakers (2-5) at Crypto.com Arena on Friday, November 4, 2022 at 7:30 PM ET on SportsNet LA and SportsNet RM. 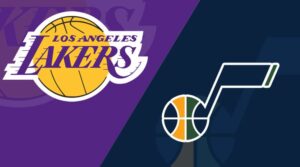 With both LeBron James and Anthony Davis on the injured list, the Utah Jazz may face a depleted Los Angeles Lakers team on Friday.

The Jazz are in Los Angeles for the second of three games on the road.

The Jazz’s loss to the Nuggets on Wednesday dropped them to 2-3 on the road this season after winning in Minnesota and New Orleans to start the year.

The Jazz are attempting to end a three-game road losing streak that began last week in Houston and has since been extended by defeats to the Denver Nuggets and Dallas Mavericks.

According to Sarah Todd of The Deseret News, Simone Fontecchio (conditioning) is questionable for Friday’s game against the Lakers.

Leandro Bolmaro (COVID-19) has been ruled out of Friday’s game against the Lakers, according to Sarah Todd of The Deseret News.

Walker Kessler and Rudy Gay made their return to the lineup against the Mavericks after being out the previous three games due to illness.

Gay had two points and five rebounds in 13 minutes, while Kessler played only four.

The Jazz had a 15-point lead over the Mavericks midway through the third quarter, but were defeated 103-100.

The Lakers are on a two-game winning streak after losing their first five games of the season.

The Lakers were the last team to win after starting 5-0, but they have won back-to-back games against the Nuggets and Pelicans since guard Russell Westbrook was benched.

Dennis Schroder and Thomas Bryant have yet to play for the Lakers this season due to UCL injuries.

LeBron James is listed as probable for Friday’s game against the Jazz due to left knee soreness.

Anthony Davis’s availability is in doubt due to lower back tightness.