Denver and Los Angeles meet for the first time this season, with the Nuggets favored by two points. The visitors may be without Bones Hyland (non-COVID illness), while the Clippers are questionable with Paul George (hamstring) and Kawhi Leonard (ankle). 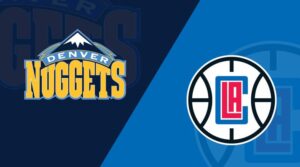 Paul George (hamstring) will miss the Nuggets game on Friday.

Due to a strained right hamstring, George will miss his third game in a row.

Kawhi Leonard (ankle) will not play against the Nuggets on Friday.

Leonard will miss his 15th game of the season for the second time this season due to a sprained right ankle.

Luke Kennard (calf) will miss Friday’s game against the Nuggets.

Following a 110-108 home loss to the lowly Detroit Pistons the night before, the Denver Nuggets (11-8; 9-10 ATS) defeated the Oklahoma City Thunder 131-126 in overtime on the second night of a back-to-back set.

Nikola Jokic is questionable for Friday’s game against the Clippers due to left hip soreness.

Jokic has improved in his two games since returning from a three-game absence. In his career, he has 70 points, 19 rebounds, 19 assists, one steal, and one block.

Ish Smith (calf) is questionable for the Clippers game on Friday.