The Detroit Pistons is on the road, traveling to Miami on Tuesday night to face the Heat. The Heat lead the series 65-56 and won three of the last four meetings. 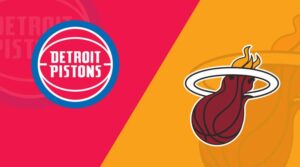 This season, the Detroit Pistons have struggled predictably, as injuries and a young group of players have caused a slew of issues in terms of winning games.

Cade Cunningham (shin) hasn’t played since November 9, and his return date is uncertain due to the possibility of surgery.

Cunningham, who has missed the last 12 games for the Pistons due to left shin soreness, may need surgery, according to Keith Langlois of the Pistons’ official website.

Cunningham’s season would almost certainly be over if he underwent surgery.

For the time being, the Pistons have declared Cunningham out indefinitely, leaving open the possibility that he’ll be able to play again in 2022-23 if his shin responds well to extended rest.

Meanwhile, according to coach Dwane Casey, Livers (shoulder) suffered an injury against the Mavericks on December 1 and is expected to miss some time.

Jimmy Butler (knee) will play against the Pistons on Tuesday.

Butler was deemed questionable for Tuesday’s game due to knee soreness, but the medical staff has cleared him. It wouldn’t be surprising if the team closely monitors his minutes after he’s only played in one of his team’s last eight games due to a knee injury.

Omer Yurtseven (ankle) and Victor Oladipo (knee) have yet to play this season. They have been disqualified from this competition.

At the moment, neither player has a timetable for their return.

Coach Erik Spoelstra said Wednesday that Victor Oladipo (knee) is fully practicing but will not return during the team’s current road trip, according to Barry Jackson of the Miami Herald.

Due to left knee tendinosis, Oladipo has yet to play this season, but he appears to be on the mend.

Despite the fact that Spoelstra’s update indicates that the guard will miss at least three more games, he could be cleared to play as early as next week.