Two days ago, the Miami Heat and Charlotte Hornets had a heated rivalry, and they now have the opportunity to compete in the Saturday night series. 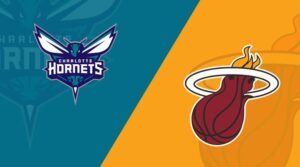 Victor Oladipo has yet to play this season due to left knee tendinosis. The 30-year-old guard hasn’t played more than 36 games since the 2018-19 season. Oladipo is unlikely to return anytime soon, according to fantasy owners.

Due to a foot injury, Miami Heat guard Dewayne Dedmon is questionable for Saturday’s game against Charlotte.

Tyler Herro could miss his third game in a row due to a sprained left ankle.

LaMelo Ball (ankle) will not play against the Heat on Saturday.

Due to an ankle injury, LaMelo Ball has yet to play this season and will be out again on Saturday.

His next game will be against Orlando on Monday, but he has no set return date.

Cody Martin will be out for six weeks after undergoing an arthroscopic procedure on his left knee on Friday.

Martin has been out with a quadriceps injury since the Hornets’ season opener on Oct. 19.

Martin decided on surgery after making little progress in his recovery over the previous three weeks, and he will now be out until at least late December.

Gordon Hayward (shoulder) will be out against Miami on Saturday. Hayward will miss his fifth consecutive game due to a strained left shoulder.