This is the first time these two teams have met this season. Cleveland won both games last year, including a 92-79 victory in Los Angeles in October. The Cavaliers are on a five-game road trip that began with a 112-88 victory over Detroit on Friday. 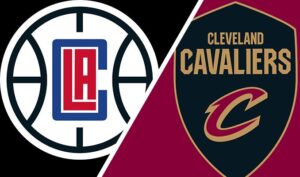 Following a brief early-season slump, the Clippers have won three consecutive games heading into Sunday’s game against Utah. The team is now 5-4 overall, 3-6 ATS, and 1-2 at home.

Kawhi Leonard will not be in Los Angeles.

Leonard’s injury can be found here.

Leonard (knee) is “progressing well,” according to coach Ty Lue, but no timetable has been set.

Leonard is currently limited to individual workouts while the team works to relieve the pain in his surgically repaired right knee, which has kept him out since Oct. 23.

Luke Kennard suffered the injury against the Spurs on Friday, but the Clippers have provided no further information other than that he experienced chest discomfort.

Paul George has a good stat line, but his feet are in bad shape. His numbers are declining, and he is the team’s focal point. That is concerning. However, despite his age and injuries.

The Cleveland Cavaliers are on a roll right now. They are 8-1 and have not lost since their season opener against the Toronto Raptors, when Darius Garland suffered an eye injury and was sidelined for several weeks. Despite this, the Cavs rolled, winning decisive game after decisive game.

Both Darius Garland and Donovan Mitchell are listed as probable for this match.

Dylan Windler has yet to appear in a game this season. When he becomes available, he is not expected to play a fantasy-relevant role.