The Philadelphia 76ers (10-9, 2nd Atlantic) will play the Orlando Magic at the Amway Center on Sunday (5-14, 5th Southeast). This is the second game in a row between Philadelphia and Orlando, with the Eagles winning 107-99 on Friday night.

Are James Harden and Joel Embiid READY vs Magic? 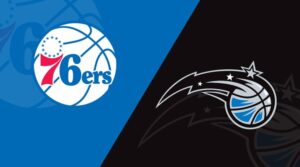 Joel Embiid, the 76ers’ leading scorer and rebounder, is questionable for Sunday but did not play against the Magic on Friday. The 76ers are also without their second-leading scorer Tyrese Maxey, as well as James Harden and Jae Crowder, leaving them with a very thin roster.

James Harden (foot) stated on Thursday that he is on track with his recovery.

Harden suffered a right foot tendon strain in early November and was expected to miss about a month, but he’s making good progress two weeks later.

Joel Embiid (foot) will miss Sunday’s game against the Magic.

Due to a left foot sprain, Embiid will miss his fourth straight game on Sunday. Embiid’s next appearance will be against the Hawks on Monday. Montrezl Harrell and Paul Reed should continue to see extended frontcourt minutes in his absence.

Tyrese Maxey (foot) will miss three to four weeks due to a minor fracture in his left foot.

Matisse Thybulle (ankle) will miss the game against the Magic on Sunday.

Thybulle’s left ankle injury will keep him out of the game for the time being. This season, he’s struggled to find a role and hasn’t played in double figures since November 13. His presence has little effect on the rotation at this point.

Orlando hasn’t escaped the injury bug, either, as leading rebounder Wendell Carter Jr. is questionable, as is assist leader Cole Anthony, among others who are either questionable or out.