The fourth week of the NBA regular season begins on November 7, 2022, with a day of action for all teams, including the Suns vs 76ers match. Throughout the season, the two teams will be pitted against each other because they will undoubtedly be the leaders of their respective conferences. 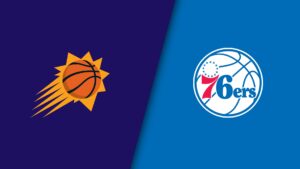 On November 8, 2022, at 1:00 a.m. UTC, the Philadelphia 76ers will face the Phoenix Suns. The preliminary injury reports for both teams are listed below.

The Suns’ main strength is their teamwork, as they currently rank second in assists per game with 29.4 and first in offensive ratio with 120.2.

However, the latest injury report appears to be bad news for Suns fans.

Cameron Payne (foot) is questionable for Monday’s game against the 76ers.

According to Gerald Bourguet of GoPHNX.com, Wainwright (personal) will not play against the 76ers on Monday.

Washington will miss Monday’s game due to personal reasons.

According to the Suns, Johnson tore his meniscus on Sunday.

That previous game was played without its two main stars, James Harden and Joel Embiid, and while the latter is doubtful until the game begins due to illness, “La Barba” is out due to a foot injury. This will undoubtedly hurt the 76ers offense, which ranks second in the league in possessions per game (95.6).

Tyrese Maxey has now scored at least 28 points in five of his last six games, and he should continue to be the 76ers’ primary offensive threat while Embiid and Harden are both out.

Tyrese Maxey and Shake Milton are ready to step up in James Harden’s absence.

According to Gina Mizell of The Philadelphia Inquirer, Philadelphia head coach Doc Rivers stated on Sunday that Harden (foot) is currently in a walking boot and will be limited to non-weight-bearing activity for the time being.

Joel Embiid (illness) is a game-time decision for Monday’s game against the Suns.