The latest injury status of Mike Conley and Kawhi Leonard 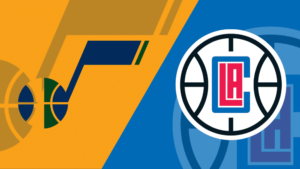 The Jazz continue to pass the ball and find open shots. They rank sixth in the NBA with 27.8 assists per game. Utah ranks fourth in the NBA in adjusted offensive efficiency (115.8 points per 100 possessions) and eleventh in 3-point percentage (37.3%).

Mike Conley (knee) avoided major ligament damage but will miss at least two weeks due to a strained left knee.

On Saturday night, Conley suffered a non-contact injury to his left knee against Portland. While he will miss the rest of the month, the fact that he avoided serious injury is a huge relief for both the Jazz and the veteran point guard.

The Los Angeles Clippers (10-7; 8-9 ATS) will finish a three-game homestand Monday, looking for their third consecutive victory. After defeating the Detroit Pistons 96-91 on Thursday, the Clippers routed the struggling San Antonio Spurs 119-97 on Saturday.

Kawhi Leonard is not listed on the Clippers’ injury report for Monday’s game against the Utah Jazz (knee).

Leonard appears set to do the unthinkable and play in three consecutive games for the first time this season. After missing nearly a month due to complications from his surgically repaired knee, the superstar wing made his return against Detroit on Thursday and also played in the Spurs’ win on Saturday.

Luke Kennard (calf) will be out against the Utah Jazz on Monday.

Kennard is still out with a strained right calf and no return date has been set. This will be his third absence in a row, and he will be re-evaluated later this week.

Paul George (knee) is listed as questionable for Monday’s game versus the Jazz.

George suffered a knee injury against the Spurs on Saturday, but it is not believed to be serious. Even if he misses Monday’s game, he doesn’t appear to be out for long.