The Dallas Mavericks travel to New York to face the Brooklyn Nets after a disappointing loss to the New Orleans Pelicans. Luka Doncic and his teammates are 1-2 to begin the season, but they have the potential to go 3-0. Will Dallas be able to hit their stride on Thursday night? 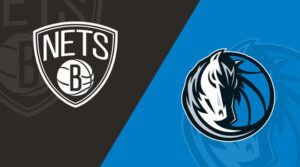 The Dallas Mavericks phenom will look to improve to 2-2 with another win against the Brooklyn Nets. The Mavericks have been competitive in all of their games and will look to beat an already demoralized Nets team.

There is no denying that the Nets have not been playing well in recent games. And they handed another loss to Giannis and the Bucks.

According to the most recent Dallas Mavericks injury report, Luka Doncic is in excellent health and will compete against the Nets.

Davis Bertans and Frank Nitilikina, the usual suspects, are out for the fourth time in a row (Tweeter made an error). Tim Hardaway Jr. also joins the list with right foot pain.

Doncic has been in great form to begin the season. He’s averaging 34.5 points per game, 9 rebounds, and 7.7 assists. We can anticipate him maintaining these averages.

The Nets are in a bad situation, with coach Steve Nash facing his first ejection as a head coach. Ben Simmons has also been struggling, and while Kyrie and KD can put up numbers, they are meaningless.

The same can be said for Doncic, but the Mavericks have suffered close losses. So, will the league’s new face triumph over the league’s most talented duo?

Because it is the second night of a back-to-back, the Nets did not release an official injury report, but Seth Curry, T.J. Warren, and Markieff Morris are all expected to miss another game.

Joe Harris and Ben Simmons are both candidates for rest after missing significant time with injuries last season, but no official word has been given yet.

On the NBA’s official injury report, the Mavericks ruled out Frank Ntilikina (ankle) and Davis Bertans (knee). Both players will miss their fourth game in a row.

Tim Hardaway Jr. is questionable after suffering a foot injury in Tuesday’s loss to the Pelicans.