On Tuesday, the Boston Celtics will play the Oklahoma City Thunder in Oklahoma City, Oklahoma. The Celtics were defeated by the Denver Nuggets 123-111. The Thunder come into this game after a 115-96 loss to the Philadelphia 76ers. They didn’t look good on either end of the court, and if they want to win at home, they’ll have to apply more pressure and make more shots. 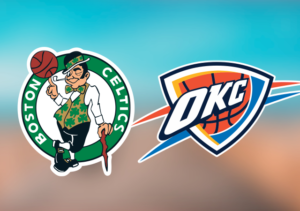 The Oklahoma City Thunder currently sit in 12th place in the Western Conference, 9.5 games behind the first-place Denver Nuggets. The Thunder average 115.2 points per game and shoot 45.9% from the field on offense. This team ranks 10th in points per game and 23rd in team shooting percentage.

On defense, the Thunder allow 116.8 points per game, and their opponents shoot 46.7% from the field. This is the 25th lowest point total allowed per game, but the 11th lowest field goal percentage.

Jeremiah Robinson-Earl (ankle), Aleksej Pokusevski (leg), and Ousmane Dieng (wrist) are all out.

The Boston Celtics currently lead the Eastern Conference standings by 1.5 games over the second-place Brooklyn Nets.

They score 118.6 points per game and shoot 47.9% from the field. This is the highest point total per game and team shooting percentage in the league.

Jayson Tatum continues to be the offensive leader, averaging 30.9 points per game on 47.3% field shooting. Boston has also shown that it can score from anywhere on the floor.

Jayson Tatum leads the team in scoring, averaging 30.9 points per game on 47.3% shooting from the field. Boston has also shown that it can score from anywhere on the floor.

On the defensive end of the court, the Celtics have been difficult to beat. They currently allow 112.4 points per game and opponents shoot 46.8 percent from the field. This is the 13th fewest points allowed per game and the 13th lowest shooting percentage allowed.

Williams is questionable for Tuesday’s game against Oklahoma City due to left knee injury management.