Jaylen Waddle has been a fantasy football star yet again this season, and with a favorable matchup against Pittsburgh on the horizon in Week 7, he’s a WR1 candidate. However, a shoulder injury has him listed as “questionable” for Sunday night’s game. 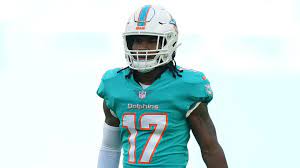 Waddle (shoulder) has been limited in practice all week, earning him the “questionable” label. There hasn’t been much issue about Waddle’s accessibility, and coach Mike McDaniel even stated on Wednesday that Waddle will play against the Steelers on Sunday night.

Luckily, Waddle doesn’t appear to be a major issue, and as long as he’s active, he’s a must-start.

The move back of Tua Tagovailoa will only advantage Waddle, who has been a high-target, big-play threat in almost every game this season.

If he is a late scratch, Trent Sherfield will likely see a significant increase in targets and is worth a deep-league flex spot due to the highly favorable matchup.

Dante Pettis, Nelson Agholor, DeVante Parker, and Tyquan Thornton are among the other potential prime-time pivots.

You can read also: