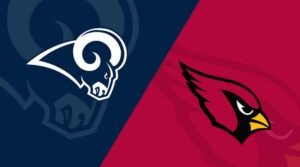 Both teams finished with losing records after disappointing seasons.

The Rams look unlikely to defend their Super Bowl victory from February, while the Cardinals have struggled all season against both good and bad teams.

The Rams are attempting to sweep their NFC West rival for the season.

The Cardinals dropped their second straight game, 31-21 to the Seattle Seahawks in Glendale, after blowing a 14-10 third-quarter lead.

Both the Rams and the Cardinals have injuries this week. Each team is dealing with a slew of injuries, including Matthew Stafford and Kyler Murray, who are both questionable for Sunday.

On the injury report, the Rams’ two key starters, Greg Gaines and Alaric Jackson, are listed as questionable.

They are unlikely to play against the Cardinals due to elbow and knee injuries.

If Gaines is out, Ty Nsekhe would replace Jackson at left tackle, and Marquise Copeland would likely see more playing time.

Sean McVay has also ruled out Malcolm Brown and Travin Howard. Robert Rochell is questionable to play due to illness. He’s been sick for the past week. Stafford is without a doubt the Rams’ biggest unknown.

According to McVay, the Rams may not know whether their quarterback will suit up until Sunday, possibly up to 90 minutes before kickoff.

Murray and Budda Baker are two of the Cardinals’ eight questionable players. The starting offensive linemen, Rodney Hudson and Max Garcia, have already been ruled out.