The Memphis Grizzlies (6-3) look to extend their three-game winning streak at home when they host the Washington Wizards (4-5) on Sunday. 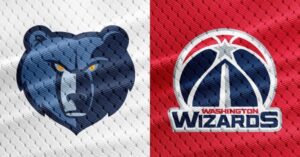 After a hot start, the Wizards have now lost four of their last five games. However, they are still 2-2 on the road. The Brooklyn Nets defeated them at home on Friday, 128-86.

Due to the league’s health and safety protocols, the Wizards will be without their star, G Bradley Beal, who is averaging a team-high 21.6 points per game, on Sunday.

Washington finished 24-28 in the Eastern Conference and 14-27 on the road last season. The Wizards averaged 6.4 steals, 5.0 blocks, and 12.6 turnovers per game last season.

There is currently no official injury report from the Wizards.

The Grizzlies are one of only three teams in the Western Conference with an undefeated home record (3-0). They’ve won two straight games, 111-106 against the Portland Trail Blazers on Wednesday and 130-99 against the Charlotte Hornets on Friday.