The Memphis Grizzlies will look to bounce back from a loss at Washington when they travel to New Orleans on Tuesday night for a primetime matchup on TNT. 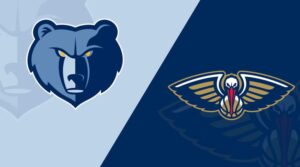 The New Orleans Pelicans have high hopes for this season, but have yet to find a consistent level of play. The Pelicans are 7-6 through 13 games, with two victories in their last three.

In 38 minutes against the Rockets on Saturday, Brandon Ingram had 20 points (8-19 FG, 0-4 3Pt, 4-4 FT), five rebounds, five assists, one block, and three steals. He will suit up against the Memphis Grizzlies today.

Zion Williamson is expected to play in the upcoming match.

On Saturday, he only needed nine shots to score 26 points in 35 minutes against the Rockets, but he also appears to have injured himself. The superstar forward is questionable with a right foot/ankle sprain, but the severity of the injury is unknown.

The Grizzlies had won five of their previous six games, including one against the Wizards. They were unable to continue their hot streak on Sunday, possibly due to the absence of their best player.

Ja Morant (ankle) is listed as questionable for Tuesday’s game against the Pelicans.

Desmond Bane (toe) is listed as questionable for the Pelicans game on Tuesday.

He suffered an injury against Washington on Sunday and is unlikely to play against New Orleans.