The Phoenix Suns are on the road, heading to New York to face the Knicks on Monday afternoon.

Devin Booker and R.J. Barrett OUT for Knicks vs. Suns 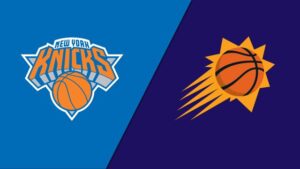 Phoenix struggled at the end of 2022, losing their second straight game and fifth in a row on the road against Toronto on Friday night.

This season, the Suns rank 11th in the league in scoring offense, averaging 115.1 points per game. Phoenix is 18th in rebounding, averaging 43 boards per game, and fourth in assists, averaging 26.9 assists per game.

Johnson (knee) had surgery after injuring himself against Portland on November 4. He is with the team on this road trip, so he could play here or against the Cavaliers in the trip’s final game on Wednesday.

Payne has been out with a foot injury since December 13 and has no set return date.

Booker (groin) missed three games, played four minutes against the Nuggets on Christmas, and has been out since: he is expected to miss at least four weeks and is expected to return in late January.

Shamet (Achilles) has missed three straight games and it’s unclear when he’ll return. Keep an eye out for updates on these injury cases.

Booker (groin) will be out for at least four weeks, according to Shams Charania of The Athletic.

New York had lost five straight games before rolling past Houston on the road on Saturday night to regain control of the series.

The Knicks enter this game averaging 114.5 points per game, which ranks them 14th in the league. New York ranks third in the league in rebounding with 47.1 rebounds per game, and they rank 24th in assists with 23.3 dimes per game.

Toppin (knee) suffered a knee injury against Atlanta on December 7 and is expected to be out until at least mid-January, according to recent rehab reports.

Barrett (finger) suffered a laceration against the Mavericks on December 27 and will be out for about a week.

Brunson (hip) has missed the last two games and is listed as day-to-day, so stay tuned for updates.