David Montgomery returned to practice in a limited capacity on Thursday, according to the Bears’ official injury report. 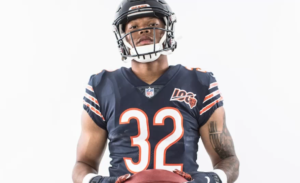 UPDATE : Montgomery participated in another limited practice on Friday and is now listed as “questionable” for Sunday’s game against the Vikings.

Montgomery was not able to participate in activities last week. After that he missed Week 4 after having to suffer ankle and knee injuries in Chicago’s 23-20 win over the Houston Texans in Week 3.

He (ankle, knee) was among the numerous Bears players who did not practice on Wednesday, based on team’s injury report.

But Montgomery’s life has not been without challenges. In Weeks 1 and 3, he gained 37 yards on 20 carries, then watched Herbert gain 157 yards in Week 3 and 77 yards in Week 4 while he was out.

Regarding that Montgomery is in his contract year, it’s realistic to wonder if he’s under pressure to get back on the field and audition for the Bears or another team in 2022 and beyond.

He hopes to continue this trend in Week 5 against the Vikings. If he is ruled out, Khalil Herbert, who is on the RB2 radar, will start.

Herbert had a strong game against the Giants, gaining 77 yards on 19 carries and catching a 24-yard pass.

The young running back is an excellent RB2 play this week against the Vikings, who allow 131 rushing yards and 20.3 fantasy points per game (fifth most in the NFL).

If David Montgomery is active, consider both backs flex worthy.