The Oklahoma City Thunder take on the Orlando Magic on Tuesday. This game lost its national luster after it was announced that No. 2 pick Chet Holmgren would miss the entire season due to a foot injury. 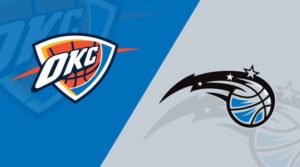 Quite an impressive week for the OKC Thunder who set aside tanking and wowed their fans and analysts alike with a 3-0 performance.

It wasn’t just three wins either, they defeated the team most have tapped to win the title and often referred to as the deepest team in the association (Clippers) twice and then marched into Dallas and took down Luka Doncic and his cohorts in overtime!

With that let’s jump into week three of NBA action and the preview for the next match against fellow tankers… the Orlando Magic.

The Thunder (3-3) have won three straight games after a thrilling overtime victory over the Dallas Mavericks. The Magic (1-6) have been led by No. 1 pick Paolo Banchero, who has averaged 22.7 points per game.

It was anticipated Josh Giddey (ankle) would be back before now but he remains listed as questionable (although that could be updated shortly).

The Magic have a number of questionable players on their roster:

Suggs (ankle) is questionable for Tuesday’s game against the Thunder.

Mo Wagner (foot) has been ruled out for Tuesday’s game against the Thunder.

Harris (knee) is out for Monday’s game.